The Reptilian Brain and the Buddha Mind 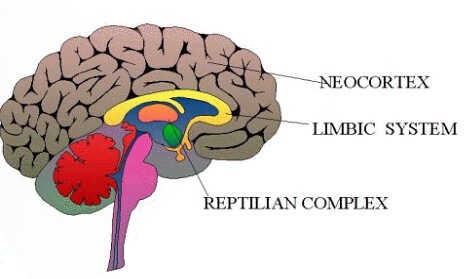 The Reptilian Brain and the Buddha Mind

Putting all philosophical views aside, let’s look at our human experience.

The human animal evolved from much more primitive life forms. Many of the remnants of those earlier life forms remain in our anatomy. A fundamental aspect of our brain is controlled by the “reptilian-like” functionality known as the instinctual urges to survive and to reproduce.

The reptilian brain dominates our
limbic system in the lower brain. All the higher intellectual powers of the brain evolved only to further the survival capacities of the reptilian brain. The ultimate “boss” of our organism, especially when under stress and duress, is the ancient reptilian brain. It always looks out for its own survival and usually, possible mating opportunities.

All thoughts, concepts, thinking processes and emotional states are all sophisticated modes being used by the reptilian brain in order to accomplish its goals.

This accounts for our resistance to sitting in meditation because it doesn’t really fit into the overall reptilian plan of increasing wealth, security and reproducing. This is why many meditators report much sexual fantasizing and the like often occurring during long bouts of sitting practice. The “boss” is trying to get things back on the right track.

When we sit in an undirected, state of “observing” meditation, our awareness will begin to notice all the mental traffic. ALL the mental traffic ties into the overall goals of the reptilian brain, no matter how sweet and sugar coated those thoughts “seem” to be. Even kind and “compassionate” thoughts are only a regard for others of our own or our favorite species’, survival. Wanting to help and care for others to survive, is just part of the broader survival instinct.

The reptilian brain has its tentacles wrapped around all of our activities. It’s always a businessman in that even love is a transaction expecting some kind of consideration in return.

Now in stark contrast is our Buddha Mind. It’s not an organism, has no evolved anatomy and has no interest in survival or reproduction.

Knowing this, we can differentiate the mental activities of the reptilian brain from the empty and serene clarity of the Buddha Mind awareness during meditation.

In contrast the Buddha Mind has no thoughts, no concepts, no daydreaming, “no mind”, no dualism, no fear, no agenda, no goals, no interest in survival, is unconditional love, has no stress, is uncaused joy, is contented satisfaction, no money goals, insightful wisdom states of mind, no personal identity, and unchanging “presence” outside of space and time.

Sitting in empty, alert and clear awareness, notice and ignore all the activities of the reptilian brain, with the instructional words of the Buddha; “not me”, “not mine” and “not my self”.

When in a state of rigpa, the reptilian brain immediately assumes a subservient position. Why does it yield its dominant position? It’s because it instinctually knows that rigpa will be a much better “captain of the ship”. The Buddha Mind has unlimited intelligence and power, where the reptilian brain has only the brain of a turtle with fox-like upgrades.

This entry was posted on September 6, 2018 by Lou. It was filed under Dzogchen, Mind, Nirvana, Rigpa, Samsara, Zen .